Unitarians Take to the Rails 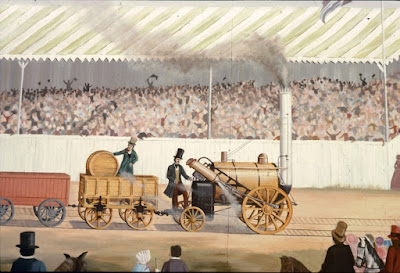 The Liverpool & Manchester Railway, which opened on 15 September 1830, was dominated by Unitarians. The railway was the brainchild of  two Unitarians: Joseph Sandars of Liverpool and John Kennedy of Manchester, owner of what was then the largest cotton spinning mill in Manchester (and by extension, perhaps the world).  John Kennedy was a member of the Mosley Street congregation in Manchester – other members included the industrialists Edmund Potter FRS, and Robert Hyde Gregg (he was also a Proprietor of the L&MR). Kennedy’s daughter married Edwin Chadwick, the noted social reformer who worked tirelessly to improve urban sanitation and public health. Sandars, a wealthy corn merchant, was a member of the Paradise Street congregation in Liverpool. Amongst the proprietors were the following Unitarian notables:

The project took nearly ten years to complete – the Board of the Liverpool & Manchester Railway appointed George Stephenson of Newcastle as it’s chief engineer. Stephenson had been a pupil of the Unitarian Minister Rev. William Turner of Newcastle and was a member of the Dissenter’s (latterly Unitarian) chapel at Wylam. Wealthy Newcastle industrialists the Walkers had founded the chapel; George Walker had been president of the Warrington Academy (1798). Company Secretary and Treasurer was Henry Booth, a well-connected Liverpool Unitarian. It was Booth who suggested to Robert Stephenson (George’s son) that he adopt the multi-tube boiler (patented by Marc Seguin in France in 1828) for his locomotive the “Rocket” which he was to enter in the Rainhill Trials of October1829 to find the best type of motive power for the new railway. Booth also had shares in "Rocket" and stood to make a considerable sum of money if the Stephensons won the trial and therefore the contract to supply the locomotives to the L&MR. The Liverpool Chronicle levelled charges of corruption at the L&MR, suggesting that  because of the relationship between Booth, Stephenson and the Directors of the L&MR the Rainhill Trials were merely a publicity stunt. The Unitarian owned and editted Manchester Guardian came to the defence of Stephenson and the Board. The London based Mechanics Magazine criticised Stephenson and the L&MR Board - but these were penend by Stephenson's rival Charles Vignoles as part of his personal anti-Stephenson campaign.

“Rocket”, of course, won the day but at the time there was a suggestion of foul play due to the connections between the Stephensons and the Board of the Liverpool & Manchester Railway. “Rocket” was by far the best locomotive demonstrated, and one that incorporated many (but not all) the design features of the mature steam locomotive. “Rocket” had been built to do one job and one job only: to win the Rainhill Trails and she was effectively an evolutionary dead-end. It was the “Planet”  - built by the Stephensons which first ran 4th December 1830 – that is generally considered to be the ‘mother’ of the steam locomotive. The speed of development can be shown by the fact that whilst  “Rocket” (1829) weighed 4 tons and had top speed of c.20mph, “Planet” (and her six sisters) came in at 9 tons with a top speed of c.30mph – a speed at which Unitarian polymath Dr Dionysius Lardner suggested the human being would suffocate. Having been fireman on the replica “Planet” at the Museum of Science and Industry in Manchester, at only speeds up to 10mph, I take my hat off to those early enginemen as “Planet” has no cab and only a very flimsy (and quite low) safety rail to stop you falling off! 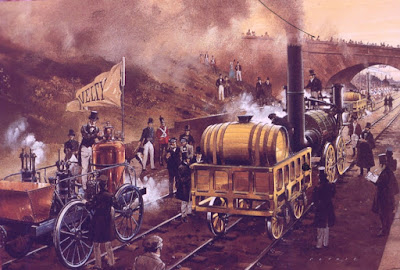 “Rocket,” other than Ericsson and Braithwaite’s “Novelty” was the only serious competitor –Joseph Brandredth entered the “Cycloped” which was nothing more than a horse-powered self-propelling treadmill on wheels, whilst Timothy Hackworth’s old-fashioned entry “Sans Pareil” should have been disqualified for being too heavy. Hackworth, however, vehemently complained that “Sans Pareil” was not over weight. The Judges remained resolute but the Directors, however, approved Hackworth’s entry, perhaps to make the competition less of a ‘one horse race.’ Hackworth, a fierce and bitter rival of the Stephensons, levelled a charge of corruption and industrial sabotage against them: unable to cast the cylinders for “Sans Pareil” he had them cast by the Stephensons but during the trial one of them burst, and he duly cast blame on the Stephensons. Part of the intense rivalry between Hackworth and Stephenson may also have been religious: both came from the village of Wylam but whereas Stephenson was a Unitarian, Hackworth was a Methodist – and a lay preacher to boot. Hackworth refused to do any work on Sunday - not even to get "Sans Pareil" ready for the trials - whilst Messrs. Stephenson and so such qualms! There may also have been some class rivalry going on: both were self-made men, but Stephenson had risen rapidly in society whereas Hackworth had not. 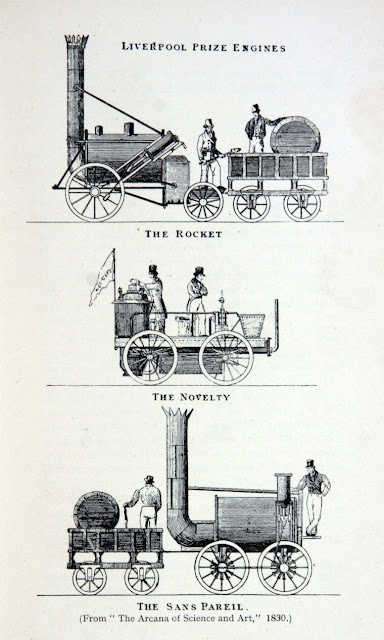 It also has to be remembered that "Rocket" was the only locomotive built in a specialist factory - R. Stephenson & Co's works in Newcastle. Hackworth built "Sans Pareil" in his spare time, using what little savings he had; despite the Rainhill Trials being advertised in January 1829 for some reason Ericsson and Braithwaite only learned of it in July leaving them with only a few months to build "Novelty". The pair had previously experimented with building steam-powered fire engines, and given the short space of time they had, "Novelty" is probably based upon the technology they developed for their steam pumps. Furthermore, only "Rocket" had any pre-Trial testing, both in Newcastle and at Rainhill carrying out demonstration runs and, when "Novelty" and "Sans Pareil" were out of action, carrying passengers over the trial course.  The leaking boiler of "Sans Pareil" and the teething trouble with "Novelty" (water feed pump; air compressor; boiler joints) would have been ironed out had there been any test period - but, as George Stephenson said the "Novelty", "had no goots" - Ericsson and Braithwaite built two "Novelty" class locos for the L&MR in 1830 but neither proved succesful over the 35-mile route and had to be rescued by one of Stephenson's engines.

Such was the pace of technological development, that "Rocket" was obsolete within  months. The L&MR ordered four "Rocket" type locomotives from R. Stephenson & Co. on  26 October 1829 ("Arrow", "Dart", "Comet", "Meteor"), first running in January 1830. They inorporated many lessons learned from "Rocket":-

In turn, these were rapidly superseded in June 1830 by "Pheonix" and "Northumbrian" which sported an integral firebox and an ash box at the front end - but not yet a smoke-box proper.  The obsolescence of "Rocket" is shown by the fact it had a working life on the L&MR of about four years; it was heavily rebuilt in 1830 following a severe accident to bring it into line with "Arrow" et al through lowering of the cylinders and fitting a steam dome. After about a year of being laid-up out of work, "Rocket" was sold in 1836 for use on the Naworth colliery.

So were the Rainhill Trials fair? Probably not! "Rocket" (despite being the most reliable locomotive present) and her design team had the advantages of not only having a fully-equipped Locomotive Factory and experienced designers and engineers to constrcut it, also had the advantage of running-in trials and being able to test and modify the locomotive before the trials began. Furthermore, Stephenson, through his Unitarian connections, knew the 'great and the good' and was probably able to use them to his own advantage - George Stephenson was excellent at self-promotion and putting himself forward as the best man for the job.

Unitarians in Liverpool and Manchester had a degree of political and industrial clout and influence far stronger than their numbers would suggest. Charges of ‘insider trading’ were levelled against them by the largely Tory, Anglican Liverpool Corporation and for demonstrating favouritism to fellow Unitarians with regards to contracts, employment and apprentices. George Stephenson – chief engineer of the Liverpool & Manchester Railway – the company founders and most of the Board were Unitarians. Was the victory of the Stephensons at Rainhill and the subsequent very lucrative contract to supply locomotives to the Liverpool & Manchester already a foregone conclusion? Yes.

Posted by AnthonyD at 02:23 No comments: