Every year it seems that certain elements of the British press and religious groups get ever more hot under the collar with regards to the increasing commercialisation and secularisation of Christmas – the Christian festival that marks the supposed birth of Jesus who traditional Christians see as the son of God. Newspaper editors hark back to the popular myth of the ‘Dickensian Christmas’, the perfect Christmas of carols, family and friendship and a good dose of morals. The former Archbishop of Canterbury, George Carey, stated in 2010 that Jesus was being  ‘air-brushed’ out of Christmas and there is even a ‘Campaign Against the Secularisation of Christmas’ established by evangelical Christians.  But what is a ‘Dickensian Christmas’? It is rather ironic that Charles Dickens the creator of the ‘modern’ idea of the Christmas festival, did so to broaden the appeal of Christmas, and as a Unitarian, did not see Christmas as the birth of the divine son of God but as a day to explicitly remember ‘ the man Jesus Christ’ who was the ‘Great exemplar’ and ‘proof of loving kindness’. For Dickens and other like-minded individuals Christmas did not have the same religious connotations and overtones as it would for Trinitarian Christians, for example. That Dickens – and others – created the modern notion of a family Christmas is doubly ironic as Unitarians for much of their history had been anti-Christmas!

The True Meaning of Hogswatch 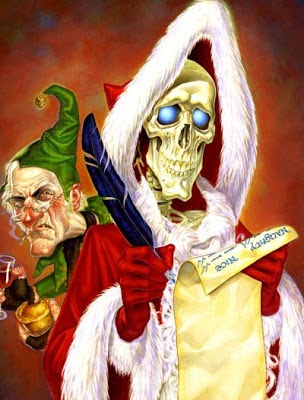 "The white boar lay on its side in the snow, which was now red with its blood. One eye stared at nothing. The tongue lolled. A breeze blew up. Something stirred in the landscape. Something under the snow. The branches of the ancient trees shook gently, dislodging little needles of ice.
The sun rose.
The light streamed over the landscape like a silent gale. It was dazzling. The great red ball turned the frost to fire along the winter branches. Gold light slammed into the mountain peaks, making every one a blinding, silent volcano. It rolled onward, gushing into valleys, and thundering up the slopes, unstoppable.
There was a groan.
A man lay on the snow where the boar had been. He was naked except for an animal-skin loincloth. His hair was long and had been woven into a thick plait down his neck, so matted with blood and grease it looked like felt. The man was tattooed. Blue whorls and spirals haunted his skin. The snow glowed orange from the newly risen sun.
The tattooed man made a gurgling sound, clutching at his throat, choking. His breath sounded like a saw. The man coughed and something bounced off a tree and landed in the snow. It was a black bean.
A bird trilled, high on a branch. A wren bobbed and fluttered to another twig.
The man was different. He had heavy furs now, with a fur hood, and fur boots. He was supporting himself on a stone-tipped spear. Something hurried through the wood, barely visible except by its shadow. It was a white hare.
Now the furs had gone and the man looked much older, although he still had the same eyes. The furs were replaced by long green robes, and he looked very much like a priest.
A little way off, four huge boars stood and steamed in front of a sledge put together from crudely trimmed trees. The Hogfather climbed aboard and sat down, he’d put on weight in the last few years and it was impossible to see anything other than the huge, red-robed man.
The idea of the Hogfather wearing red and white was a recent invention, it was believed. But, perhaps, it had also been remembered.
The figure hadn’t changed like the turning of pages in a book. All the images were there at once, and many others too. What you saw depended on how you looked."